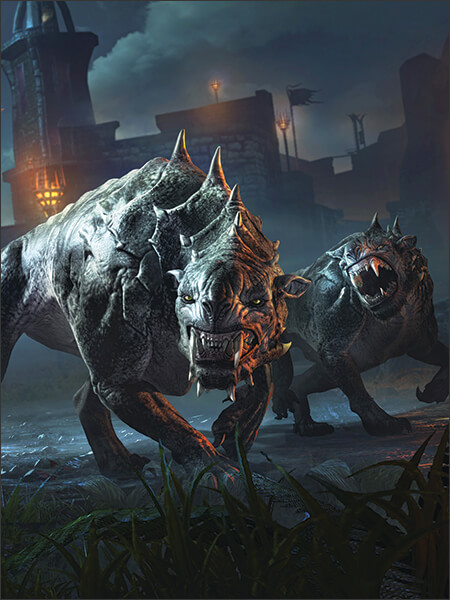 Mordor's fiercest hunters, caragors prowl in small packs, seeking everything from Orcs to graugs to consume. They prefer to pounce on their enemies, then clamp down with a bite from their massive jaws, worrying their prey like a ragdoll until dead.

Caragors are also fast runners and adept climbers, capable of scaling sheer cliffs in search of prey. Almost suicidally brave, they rarely leave combat until they or their prey are dead.

Some Orcs capture caragors and attempt to train them for war, but caragors are ill-tempered enough to make the attempt dangerous for even the bravest Uruk. Still, occasionally an Orc will succeed through luck, guile, or sheer determination.

"I saw the whites of the caragor's eyes. I smelled its breath, felt its teeth in my neck." 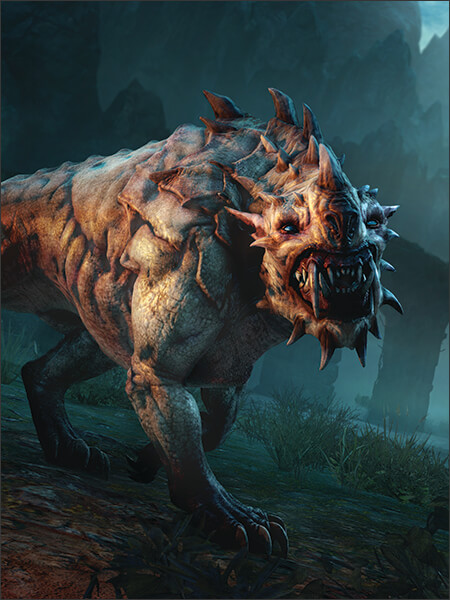 While Dire Caragors are larger than ordinary caragors, that isn't what makes them more dangerous. They are Mordor's most cunning predator, capable of great feats of tracking, but too elusive for all but the most patient hunter. A Dire Caragor has a paler hide than other caragors, and its pelt is considered a mark of distinction among the Orcs of Mordor -- especially beastmasters and anyone in the Feral tribe.

Dire Caragors are solitary creatures, spurning even other caragors as they stalk the wilds of Mordor. Little is known of their behaviors otherwise, as observers tend to become the Dire Caragor's next meal.

"Ûkbûk was a bit of a joke till he captured a Dire Caragor and made it his mount. No one jokes about Ûkbûk anymore." 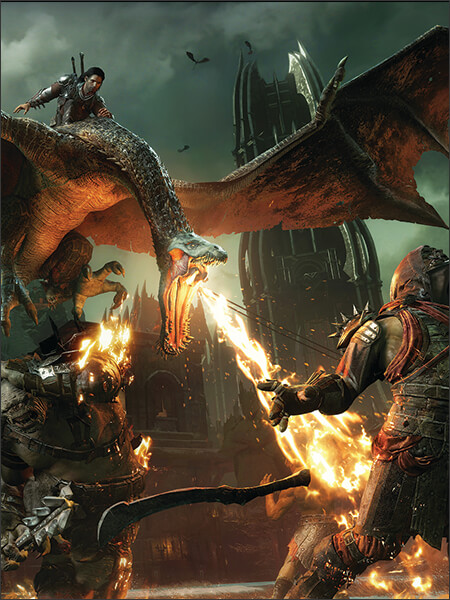 Bred in the pits of Barad-dûr by Sauron himself as the infertile spawn of dragon and fell-beast, drakes are aerial killers that rule the skies of Mordor's mountainous borders. Drakes swoop from above, disabling their prey with scorching flames and finishing them with a bite from their powerful jaws, before carrying it off to consume elsewhere. If their meal is still struggling after the initial attacks, drakes are cunning enough to ascend, then drop their prey so it falls to its death. Drakes are adept scavengers and have no compunction against scraping a meal off the ground if need be. Their favorite prey are the Great Eagles who have sometimes tried to enter the skies of Mordor.

Drakes are stubborn creatures and nearly impossible to tame without the aid of magic, though some Orcs persist in trying. Others are careful not to leave carrion out under the open sky, lest it attract drakes that will consume the carcasses, then seek out fresh prey nearby.

"Drakes are speeding, armored juggernauts of tearing claws and searing flame, and when the Nazgûl finally let us Orcs fly them, we'll be unstoppable!" 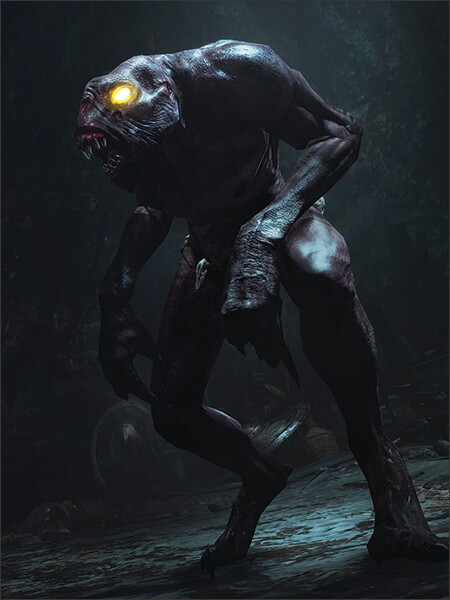 Nocturnal pack scavengers, ghûls are among Mordor's most dangerous pests. Swarming out of mounds or caves at night, they're individually no match for Uruks but overwhelming when they surround their prey.

Most ghûls attack with tooth and claw, but some can belch a glob of toxic acid at a distance. They flee from the light, and sometimes a torch is enough to keep a small pack at bay.

Ghûl packs are led by a Ghûl Matron, generally the largest and toughest of the ghûls in the group.

"Ghûls hate the light, so let's douse it and see what comes a-calling."

Queen of the Swarm

While ghûls are individually weak, the Ghûl Matron that rules each nest is to be feared. She is physically stronger than the typical Man or Orc, but her greatest threat is the poisonous bile she spews several yards away. The bile is caustic and poisonous, and ordinary ghûls know to swarm any victim hit by it. Once the Ghûl Matron hits her target, it's only a question of whether the bile's toxin or the other ghûls finish the victim off. And if the Ghûl Matron herself falls in battle, another ghûl grows to take her place and lead the pack.

"Watch out for the matron -- once her brood starts dropping, her blood'll be up!" 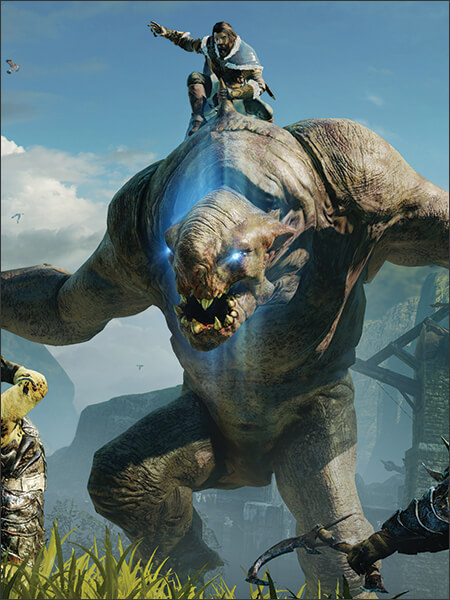 One of the oldest species in Mordor, graugs are gigantic creatures with armor-plated scales and immense strength. Native to Núrn but found in other parts of the region, graugs are natural enemies of caragors, Great Beasts, or the Were-wyrms of the Eastern Desolation. When hungry, they'll consume nearly any living creature -- including Men or Orcs if they're available.

The Uruks of Mordor hunt graugs on occasion, though such hunts are often lethal for the hunters. Packs of caragors sometimes attempt to bring down a graug as well, though their success is far from guaranteed. Graugs can kill attackers many ways: by eating them, by swatting them with their massive fists, or merely by stomping on them. 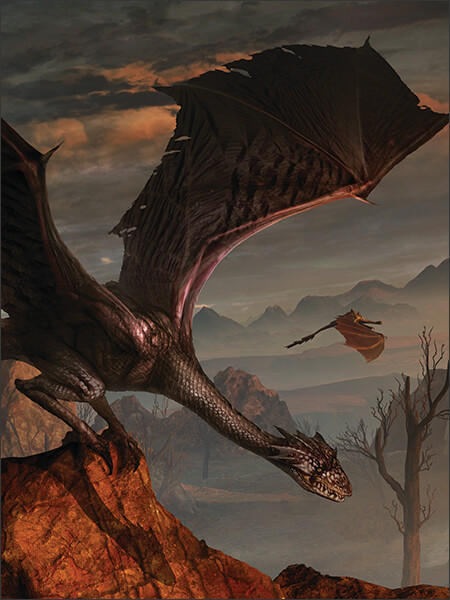 Though Orc and Man alike call them Hell-hawks, these avian predators have little in common with the feathered birds of other lands. These reptiles soar on leathery wings, then dive to feast on rats, spiders, and other flying creatures such as crows. Their long necks let them deliver a fatal bite while their bodies remain out of their struggling prey's reach.

The Orcs of Mordor believe that Hell-hawks are favorites of the Dark Lord, his eyes in the sky throughout his domain. The Men of Gondor are less certain of this, but most will loose an arrow at a Hell-hawk if it flies too close -- just in case.

"I swear, that Hell-hawk was following me. Those things are smarter than they let on." 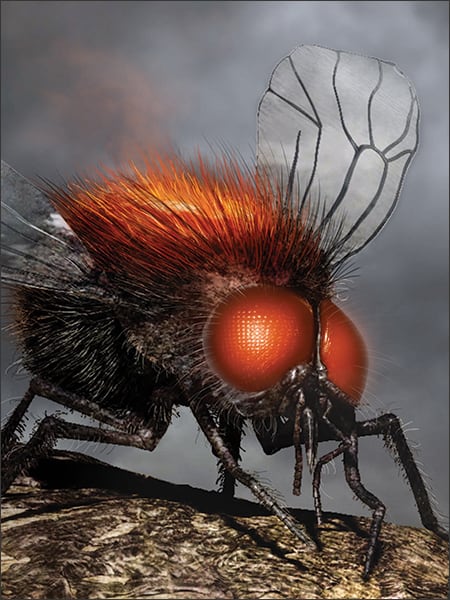 Swarming insects that feed on unburied corpses that Mordor has in abundance, Morgai flies spend much of their time dormant in hanging nests. But when a nest is disturbed, the flies swarm about and sting any Uruks in the vicinity. The buzzing of an angry cloud of Morgai flies is enough to make many Orcs flee in terror.

Uruks' dislike of Morgai flies is rooted in more than just fear of their painful stings. The fly has a red marking on its back that Uruks associate with the Eye of Sauron himself.

"I thought the Morgai flies would have sucked you dry! I should have stayed to make sure!" 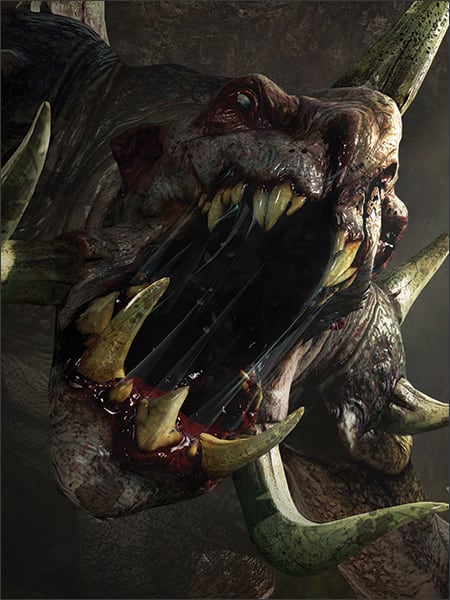 The immense strength and bulk of an ordinary graug is threat enough, but graugs capable of spewing bitter cold, virulent poison, or scorching flame have been sighted within Mordor. Most Orcs believe that the Rare Graugs are the result of ritual experimentation from the Mystic tribe or the manipulation of Sauron himself -- and thus they're reluctant to hunt these beasts. A few Orc beastmasters, however, see the taming of a Rare Graug as a worthy challenge…

"As if regular graugs weren't bad enough, Mordor had to create something worse." 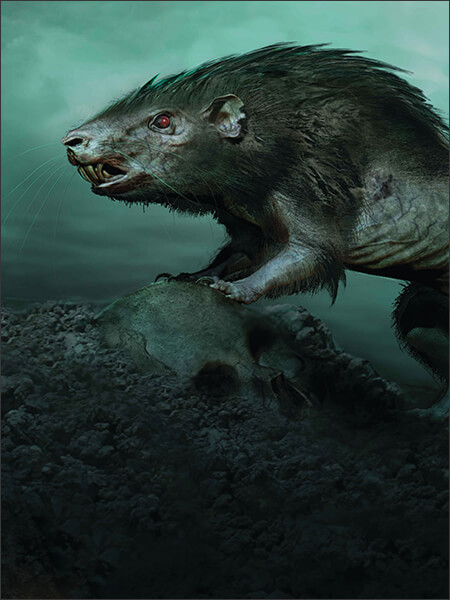 Men and Orcs agree on only one thing: rats are Mordor's greatest pest. The feral rats of the Dark Land breed quickly, devour food stores, and chew through all manner of ropes, straps, and tent-cloth. Some carry disease, and all can deliver a painful bite when threatened or hungry. When they aren't ravenous, rats are patient enough to wait for the vulnerable moment when a larger creature is distracted or the rations are momentarily unwatched.

Campfire tales among the Uruk-hai describe swarms of rats bold enough to attack an Orc in broad daylight, consuming him down to the bones in a matter of minutes. No Orc has seen it firsthand, but they've all seen enough of rats to find the tale plausible. None doubt rats would try it if they thought it would work.

"Last night, I heard the rats whispering to each other. I think they're plotting something." 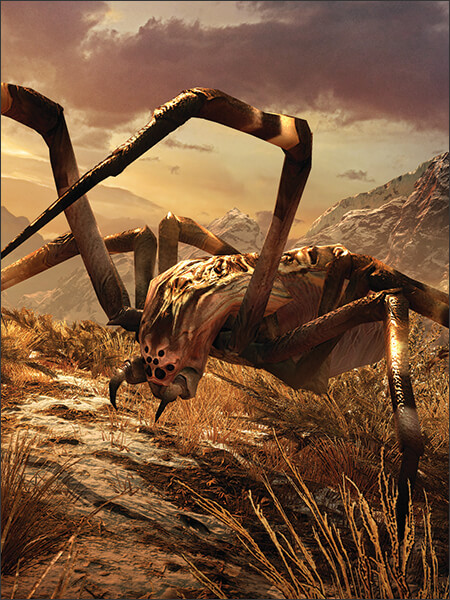 Most Orcs regard an individual spider as bad luck and a swarm of them as an ill omen. They dismiss the spiders of Mordor as mere pests, not realizing that each crawling arachnid might be the eyes and ears of Shelob. Unlike rats, spiders are mere nuisances; they don't steal enough food to notice, and only a few have bites that are at all dangerous. But with their ability to climb and scurry, there's almost no place in Mordor they can't reach, and eradicating them is a fool's errand.

"See the webs? It's spiders. Filthy creatures. Likely coming up from the valley down south."